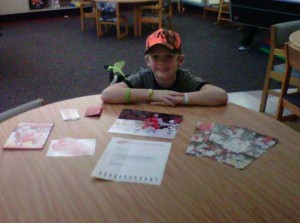 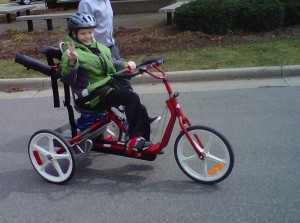 Jacob had another good day again today. I hope I can keep saying that for awhile yet. First thing he got to do this morning was the Wii Fit. He loves that part. His balance is getting better and better everyday. He also got to do the hand-pedal bike video game along with some strenthening. This afternoon he had the opportunity of getting outside and enjoying the beautiful weather by riding a large 3-wheeled bike or tricycle (he’s not quite ready for the 2 wheels). At first he didn’t want to try it (I think he was embarrassed), but had a blast once he got outside. He rode all around the parking lot for a 1/2 hour. It was so nice for both of us to get outside and get some fresh air. The rest of the day wasn’t as fun. Just a lot of exercising and walking. They have him using 2 hand or arm crutches (not sure of the technical name) instead of the cane. They don’t want him favoring one leg more than the other.

Later this afternoon, Jacob’s Uncle Neil, Aunt Kristina and cousin Brady came for a visit, along with his Aunt Rachel, cousin Jayden and most of all, his cool little brother Caleb. His Aunt Rachel brought with her an envelope of things from the Red Wings that my cousin Steve (who’s currently serving in Iraq) arranged to have sent to Jacob, including a real autographed picture from Pavel Datsyuk. He was so excited!

We enjoy having company come visit so much! It takes the sting out of having to live in a hospital.

I’ll try to get some pictures on here soon.

Comments feed for this article 9 Comments