For those of you who do not get updates through the Hope for Jacob Facebook page, Jacob is currently in the hospital in Milwaukee awaiting PET scan  results after a brain tumor was found via MRI on Monday. Jacob had been experiencing headaches for several weeks, and even after several trips to the doctor, it was concluded that it was probably just a sinus infection. Erin knew it had to be something more serious, so she scheduled an MRI at the hospital in Marquette on Monday. The MRI showed a tumor (4 cm.) on his skull, and fluid pushing on his brain stem (which had been causing the headaches). Erin and Jacob’s transfer to Milwaukee was immediately arranged, and they arrived by Med Flight that night. 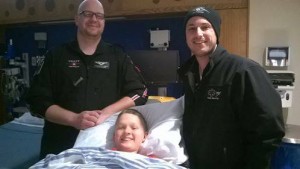 (Jacob’s new friends. They were so wonderful,

keeping him entertained throughout the flight!)

After the initial shock of his MRI results, Jacob regained his sense of humor and had such a positive attitude despite all that had happened. He finally went into surgery, just before noon on Tuesday, to have the fluid drained and relieve the pressure. He was a little anxious before heading into the operating room, but just two hours later, he was in recovery and feeling great–he could already feel the difference with that pressure gone!!!

The Stielers appreciate all of the thoughts, prayers, and kind words they’ve received during this difficult time.

The staff of Gilbert and Sawyer Elementary in Gwinn have worked out a dinner rotation for Ken and Caleb once they return from Milwaukee next week. They have also started collecting gas/food/gift cards to help relieve some of the financial stress it will undoubtedly have on the family as they commute to and from Wisconsin. If you live in the area and would like to help out, you can contact Amy Kimsel via Facebook. If you don’t have a Facebook account, you can contact me (Rachel) on here, and I will put you in touch with Amy. I will be handling this end for the time being, while the Stielers figure out their next steps.

If you don’t live in the Marquette area, but feel led to help the Stielers, you can also donate through this website by clicking the “GIVE” icon at the top of the page.

Thank you and God bless!!