Is it really Monday already?  Our time home went by way too fast.  The trip home went by fast and the roads were good, so it started off well.  Got home around 1:00ish to my sweet Caleb.  Poor little guy needed his mama.  I don’t think he was really sick.  As weird as it sounds, I think it was because his 10 year  molars are coming in.  Jacob’s doctor said that is quite possible, but warned me that when his upper molars come in, expect it to be worse.  🙁  I first suspected it when he told me that his “jaw” hurt and it felt good to chew on pieces of apple.  What???  I realized that made sense – when a baby teethes, it loves to chew on things to get some relief, right?  The same thing happened around Christmas too with the other side – ear ache, fever, runny nose…..  Poor little guy, when I looked inside his mouth, his gum was sticking up past his teeth to a point, just trying to break through.  Unfortunately, even though his fever was gone, we didn’t get to go out on our “date” like we had planned.  He just didn’t seem ready for that, so hopefully we’ll get to go next weekend.  Poor Ken had to make up missing work on Thursday from staying home with Caleb, so he went when we got home and didn’t get back till almost 10:30 Friday night.  He’s such a hard worker, then back up early Saturday morning to work Fridays route.

So, Saturday came, Ken was off to work and Caleb contemplated whether he should play at his basketball game.  He still wasn’t 100%.  He decided he would go, but just sit out some of it to rest so he wouldn’t overdo it.  Thankfully Ken got home in time and off we went with Jacob in tow.  He was excited to finally see his brother play.  Ken told the coach what was going on.  Did he sit him out at all?  Not till the very last 5 minutes.  Poor guy!  I felt so bad for him.  You could tell that he was miserable.  We found out later that he kept asking the coach to sit out, but he told him it wasn’t his turn yet.  Needless to say, he didn’t feel very good the rest of the weekend.  Should’ve just kept him home!  Saturday night, we went to a benefit dinner for a man in Skandia whose house burned down.  It brought back memories – mixed ones – as it was at the same hall that Jacob’s benefit was at and a lot of the same people were there.  Hard to believe it was almost 2 years ago.  It reminded me what an awesome community we live in.  It’s small, but when something tragic happens, they are all right there to help, no matter what.  I or should I say We are still and always will be so very thankful for all the love and support we have gotten.  Jacob’s benefit dinner was AMAZING!  It was a blur to us that night.  A lot of “should have’s” as far as wishing we could’ve thanked everyone there personally, but it was not possible.  I know we thanked everyone before, but I’ll do it again.  THANK YOU!  THANK YOU!  THANK YOU!  Although we never want there to have to be a benefit or a cause for one, I know there will be and I’m looking forward to helping out with future ones.  To pay it forward.  We have been blessed so much over the past 2 years.  It’s so amazing!

Sunday Jacob and I just went to church as Caleb didn’t feel the best, so Ken stayed home with him.  I had a hard time getting Jacob out of there as he was enjoying hanging out and talking to his buddy Drake.  Although I didn’t mind talking to my friends too!  🙂  Later, Ken and I were outside taking care of our chickens and Jacob ended up coming out too.  It was so cold, but he just wanted some fresh air.  We had a good time.  Didn’t stay out long though, but enjoyed the sunshine.  Can’t wait for spring!  🙂  There’s a picture below of Jacob with his best friend Katy.  She has been such a blessing for both the boys.  So healing for them.

This morning, Jacob and I dropped Caleb off at school and drove to Green Bay right from there.  Went to clinic first where they checked his blood counts.  Thankfully everything was up except…..his ANC.  That needed to be at least 500 for chemo and it was only 32.  Ugh!  I was a little disappointed at first as this will push everything back at least a week, but then I realized that it’s for a reason and God has a plan.  So, just radiation this week and planning for chemo and his last week of radiation next week.  Only 9 radiation treatments left!  Woohoo!!!  His doctor said that we could wait till Wednesday and it would probably be high enough then to start, but he’d have to have chemo through the weekend then and radiation all next week, so we’d be here for 2 full weeks.   He also said that he didn’t recommend it.  He said that we need to go home this weekend and be with the rest of our family – that’s more important!  Man, what a blessing this doctor is.  So, chemo next Monday it is!

Hoping this week goes by fast.  I’m thinking I might bring Caleb with me next week.  I thought it would get easier as time went on for him, but it’s getting harder.  More tears every time.  Breaks my heart!  I’ve said it a probably a million times, but I’ll keep saying it again and again…thank you everyone for your prayers and support.   Thank you Community Covenant Church and Silver Creek Church for blessing us again!  We hope you all realize how much your support blesses us!  🙂  I will also add that we love all the messages and comments from our supporters.  They lift our spirits!  🙂   Have a good week and God bless.  Please continue to pray for Jacob’s protection from the radiation!    Thank you! 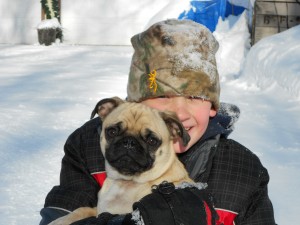 Comments feed for this article 2 Comments